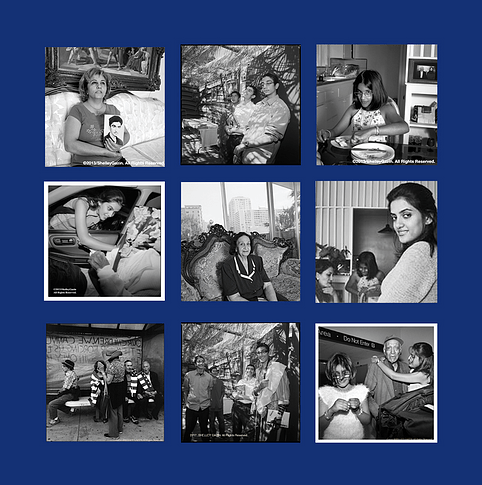 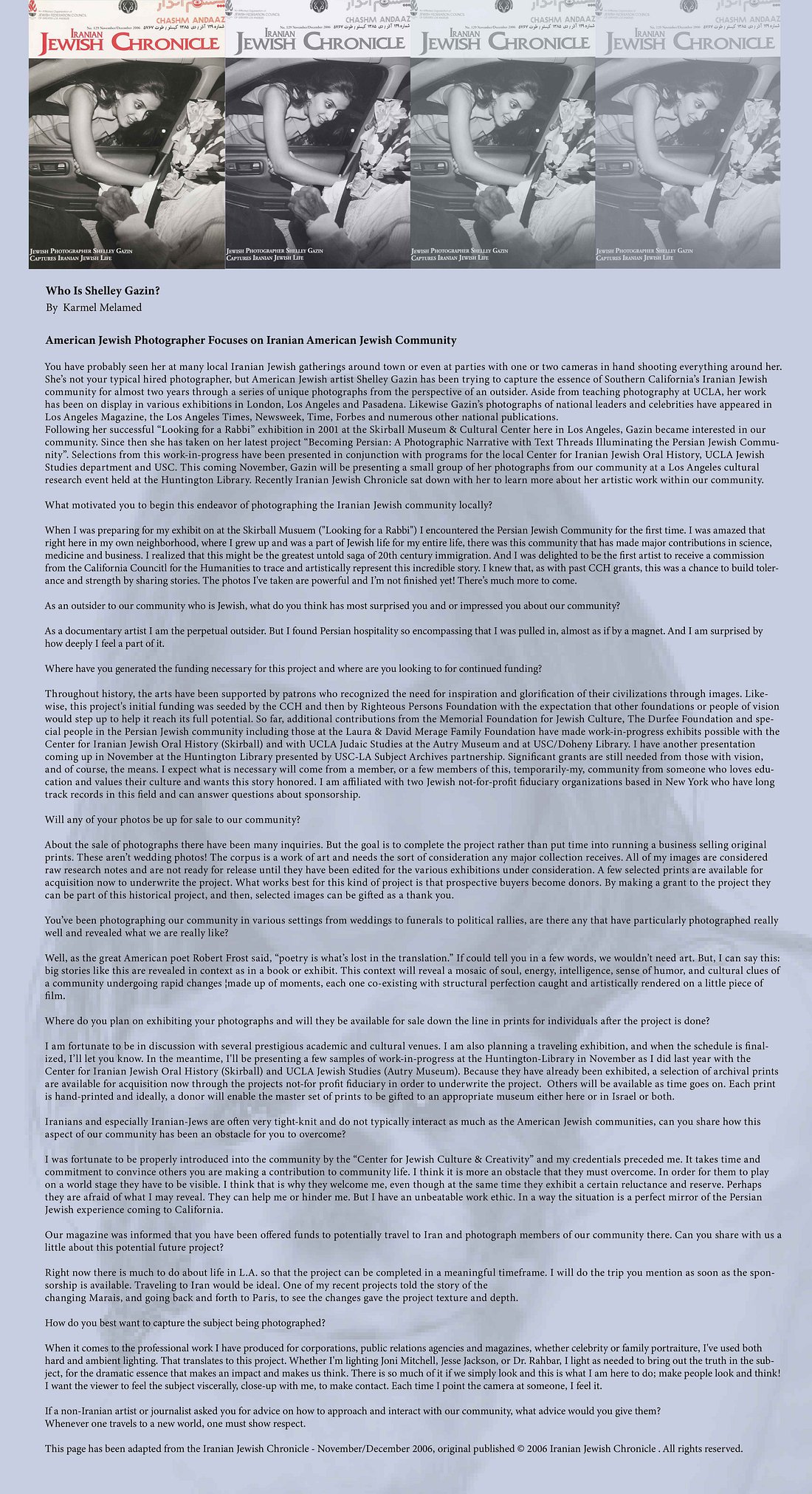 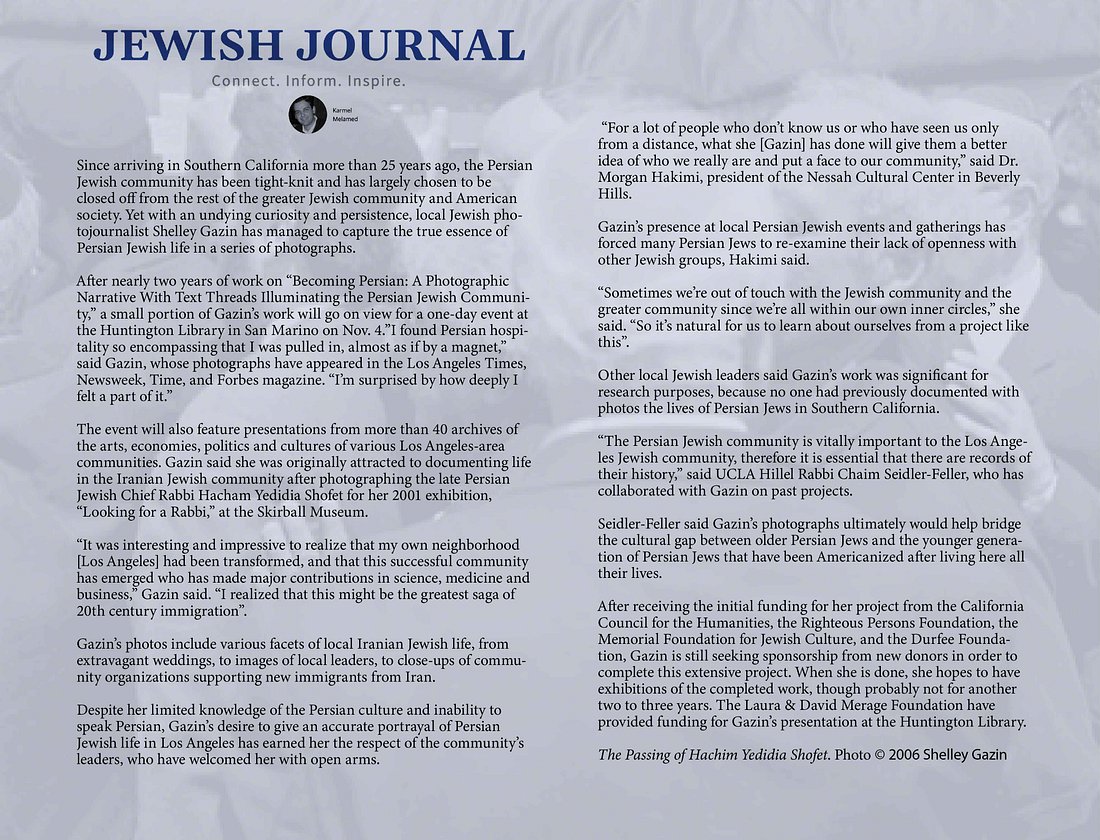 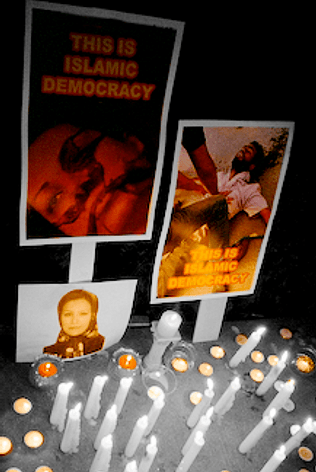 In the Fall of  2004, I set my sights on illustrating the evolving and expansive Persian-American-Jewish community that began migrating to the United States well before the 1979 Iranian Revolution forced their en masse escape from persecution. following the exodus, many but not all, who were imbued with superior skills, managed to achieve enormous gains in safety, comfort and livelihood in Southern California, a destination determined largely for it’s weather, particularly in and around Los Angeles. [And New York, but not for it’s weather, and that’s another story].

In 2005, aided by a grant from the NEH-affiliated California Humanities Council  and matched by Righteous Persons Foundation,a camera in-hand loaded with 120 film, plus intros pre-arranged by the right people, I was given entree into a private world just beyond my own backyard.

Although, I was there ostensibly to learn about and share a California success story of immigrant assimilation, in actuality it was more a process of my assimilation than theirs when it came to this project.Theirs was a culture entirely new to me [except for my past meeting with Rav David Shofet and his father, Hacham Yedidia Shofet, of Blessed Memory, Looking for a Rabbi, 2001]. As quaint as this sentiment may sound, at the time of the Millennial, I had embarked on a journey that would take me into the thrall and mystique of the Persian synagogue, the Persian language and a busy infrastructure of society bent on survival, and where I would find myself to be the only American in the room.

We were tied together only by empathy and our invisible strands of Jewish DNA. A hundred years ago, my paternal grandfather had escaped Russia’s forced army-inscription of Jews and my maternal grandparents had undergone a transformation having had the foresight to get out of Ratne [a town later wiped out by the Nazis], thus sailing to America well before the Shoah. My grandparents never spoke of their lives before coming to America. It was unrealistic to expect that Iranians-in-exile would speak to me of their former selves.

Today, I am still unraveling what makes my Jewish brethren tick, but just as I applauded my own mother’s break from patriarchy as she came upon her eightieth birthday, I came to know the character of the Persian women—full of spirit, fortitude, intelligence, talent, and a profound sense of responsibility. Witnessing the rebirth of these women on American soil deepened the conversation and mirrored my own delayed sense of personal power. Paying homage to the patriarchy had been the first order of business for all of us.

During my course of what academics credit as primary immersion research, I did my best to belong, to know who was in the room, to observe and navigate the community politics, while my camera did the work of noting civic leadership, material ambition, intellectual ambition, benevolence for the underclass, cultural mannerisms, household traditions, and the function of religious orthodoxy and ritual across the realm. A business network spanned the provincialism of the West Valley, through Beverly Hills, coalescing in a downtown restoration. The vintage textile district had gone to seed in prior years, the Los Angeles Theatre needed conservation, and these revitalizations were undertaken by Ezat Delijani along with massive real estate development by others. Before long, the story included the emergence of the first Iranian-American-Jewish generation, some of whom at this moment vie to win seats in the upcoming local election of city officials.

The naming of Ezat Delijani Square on Broadway at 7th Street, the first Nouruz proclamation celebration at L.A. City Hall also honoring Jimmy Delshad, the first Persian-American-Jewish Mayor of Beverly Hills, the continuing process of entry into the U.S. from Iran, and the ongoing public demonstrations of Iranian pride and protest - these events and more have been recorded in the GAZIN ARCHIVE, providing a bit of contemporary history-in-the making of life in this salad called Los Angeles.

I am honored to have been awarded additional support from numerous small family foundations, arts organizations and Jewish fellowship groups; the list of special people who facilitated my journey is too long for this webpage. A blog is forthcoming.

All Photos by Shelley Gazin. Copyright © 2023. All Rights Reserved.

All Photos by Shelley Gazin. Copyright © 2023. All Rights Reserved.